I'm full of admiration for those who can write short stories, because I really can't do it.  so I was thrilled when this was accepted by the publishers of 'TwitterTitters', a book compiled in aid of Red Nose Day 2009. Page 49 if you're looking :)

Of course there’s never a good time to murder your boss.
Thursday lunchtime was going to be no better than any other lunchtime – or any other time come to that.  And now there was this huge red spillage stuff on the nice carpet tiles.  What was the saying? Oh yes, “red and green should never be seen – without a colour in between”.  Well, there was this flesh coloured Kevin-thing going on in the midst, so perhaps it wasn’t entirely a faux pas, colour-wise.
Brenda would be back soon with the biscuits.  Think, dammit, think.
‘Er – he tripped over the fax machine cable.’  Too unimaginative.
Ok… ‘Body? What body?’ Sounded more plausible.
‘Kevin?  No I haven’t seen him since … oh wait a minute – here he is.’  That was good.  Very nonchalant if you asked me.
Or what about: ‘Kevin?  Oh yeah…I smacked him round the head with my heavy duty stapler and… well…look what happened.  No…I don’t care.  He annoyed me.’ Perhaps that was too near the truth.  I might get arrested for that.
So, Thursday, after all, might actually be the ideal lunchtime in which to commit murder.  I feel almost smug with this realisation.  Thursday was almost the weekend as far as Homes 4 You was concerned and half of them had been in the Crown for 20 minutes already.   I couldn’t have picked a better time even if I’d planned it!
You don’t think I planned this, do you?
Because, thirty-something bubbly blonde (otherwise) sorted secretaries don’t do that sort of thing.  Did you really think I’d woken up this morning and thought: ‘I know, just to liven up today I might bludgeon the really annoying Kevin to death at lunchtime… should kill sixty minutes!’    And I don’t think hardened killers are good where irony and puns are concerned. They’re more likely to be worried about gloves and masks and swag bags and shooters and getaway cars and stuff like that.   Seen all that on the Sweeney.
Perhaps instead of sitting here on my lumbar support typists chair I should start working out what to do next.  I can hear Brenda stirring in the sugar and tapping the cups.  Any minute she’ll be back upstairs with tea – but probably not with a great deal of sympathy I reckon.  She’ll be dead cross about the ruined carpet that’s for sure.
Oh, another one!  Pun I mean.
He’ll be too heavy to lug anywhere that’s for sure.  Stationery cupboard.  What’s the point in putting him in there?   I’m bound to leave a trail of blood and that’d be just like Hansel and Gretal with their breadcrumbs.  I know, there’s some spare carpet tiles in the storeroom – I could replace the discoloured ones?  No, that’s only going to make Kevin look bloodless.  There’d be an enquiry as to why he didn’t bleed and he might even get sainted or something and that would be really annoying.  I couldn’t think of anything worse than having Kevin for a saint.  Can you imagine a St. Kevin day?  What would we all do – run around like hopeless lunatics demanding targets are met and  deadlines are hit by nine on Friday mornings whilst giving no regard to the nice people who work for you and who want for all the world for you to shut up and stop giving them a hard time?
Ah.  In my frustration I am forgetting something.  The murder weapon.  The stapler.  And to add to the rather omnipresent irony at this time, I must just re-live the day on which our deceased friend here and I had another of our little ‘conversations’ about the merits of its purchase.

‘Five bloody ninety-nine – what - is it gold plated or something?’ Kevin had stormed, throwing the catalogue back at me.
‘It’s heavy-duty,’ I’d started – sounding like the product description and frantically trying to find the page again.  ‘And it comes with a 30 day money back guarantee if we’re not satisfied.’
‘Well let’s save us all the bother shall we? Cut out all the crap and NOT BUY IT IN THE FIRST PLACE!’
I’d smiled sweetly just then.  ‘Brenda says she would make good use of it,’ I tried.
‘I’d like to see bloody Brenda make good use of anything outside of the kitchen!.  If she were half as good with office technology as she is with the kettle and tea bags then I’d probably be the first to offer her anything as complicated as a stapler.  No, we’re not getting it and that’s final.  You can go.’

I’d fumed.  And it hadn’t been the first time I’d fumed.  Trying to reason with Kevin was a bit like trying to reason with your mum and dad. You know, the ‘whilst you’re under our roof you’ll do as we say’ type conversations they’d have with you.  Didn’t they make you fume? They did me.
So how come I got it?  Easy.  I order the stationery items.  I just added the stapler.  Like I said, Kevin’s a bit like mum and dad.  What he doesn’t know about can’t stress him.  And anyway I’d already armed myself with the scenario that if he did ever find out then I’d have offered to pay for it myself with my own money because it was ‘so necessary’ and everybody else at Homes 4 You would have backed me up.  Then, to rapturous applause at my selfless act Kevin would have retired to his office, shoulders slumped and tail well and truly between his legs.  I’d have been sainted.  Roses would have been thrown.  Well… it is my scenario!
I’m surprised the phone hasn’t rung by now.  But like I said, it’s Thursday and we’re having a Credit Crunch if you hadn’t noticed. Homes 4 You are on a lunch-break and the weight of Kevin’s body pulled out the phone line. No calls for us.  Which is just as well really because I think that if the phone did ring I’d probably jump out of my skin.  Would I?  Do I have a guilty conscience?  I do feel really bad about the carpet tiles I must admit – and they weren’t even the cheap ones that Kevin had wanted us to get.  We’d all wanted these nice aqua ones and Kevin had been outvoted.  If I remember correctly he even said we could have them ‘over his dead body!’ – now that is funny!
I’m still giggling quite a bit when Brenda returns armed with our tea and biscuits.
‘What’s the joke?’ she asks.
‘Oh, you know – Kevin and the argument about the stapler and those nice aqua carpet tiles ….’
‘And…?’
‘And the way he said we could have them “over his dead body”!’
‘Yes.  And….’
‘Isn’t it ironic that now we do?’  I’m dabbing a tissue around my eyes now.

‘I suppose it is in a way,’ Brenda says handing me a Bourbon cream.  ‘He wouldn’t listen though would he, about having the wires run properly under the tiles…Health and Safety…falls and accidents, compensation and everything…for a piffling fifty quid extra he could still be alive today!’
There is silence.  Then we catch each other’s eye.
‘Tight-arse.’ I laugh.
‘Yeah, now that was probably the best bit about Kevin!’ giggles Brenda.
We sound like we’re the ones who’ve just returned from the Crown down the road.  If Kevin had been buried he’d be spinning like a top in his grave. But he’d never listened to anything any of us said anyway.  Why should death have changed him?
‘Don’t you think,’ I start, ‘That he deserved to go with more of a blaze of glory? I mean tripping over exposed wiring is such a let-down!’
‘God yes!’ Brenda squeaks.  ‘I always imagined I’d send him flying down the stairs – the way he talked to me…’
‘Really?’ I can feel my over-active shame being relieved.  I’m joining a select society – for the ‘Creative Destruction of Kevin’.   Well something along those lines anyway.
Brenda is still mulling over her murderous imaginings.
‘Oh yeah straight down those stairs…’ she stabs a biscuit towards them.

‘Oh! You know Dave in Accounts?’ Brenda says. ‘Well, he had an idea that involved his letter opener – you know – the long one?’
‘Oh …wow.  I like the way Dave thinks!‘
We munch silently for a while.  Then I have to say something.
‘Brenda?’
‘Hmm?’
‘Do you want to hear how I killed Kevin?’

MY BOOKS ON AMAZON! 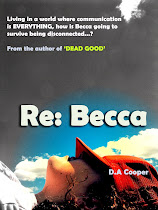 My Books on Amazon!